The Hunt for Fenn’s Gold

Yesterday I was inundated in condolence messages.

In 2010, an eccentric art collector from New Mexico, Forrest Fenn, hid a chest of gold, jewels, and rare art pieces somewhere in the Rocky Mountains after being told that he was going to die from cancer (he beat it and is still alive). He published a poem map of clues in his autobiography, The Thrill of the Chase.

All of my good friends know that I was an avid treasure hunter for Fenn’s Gold.

Treasure hunting is such a silly notion, but I was in a weird transitional time in life when I stumbled upon Fenn’s poem and started attempting to discern it. I’d been dealt some hard blows by unexpected deaths in my family, and I felt a painful uncertainty about how my life would play out. Treasure hunting was a fun distraction that reconciled my love for scavenger hunts, the outdoors, and analyzing literature. In every spare moment, I was repeating the poem’s stanzas, which I’d committed to heart, and scrolling over the Rockies on Google Maps.

Two summers ago, I packed my suitcase and my dog in my car and drove to West Yellowstone. Along the way, while listening to Jack London’s The Call of the Wild, I explored a bit of the western U.S., which is one of the most magical places in the world. En route, I passed through my hometown, Park City, Utah, attending a wonderful Bar Mitzvah for a lovely family I used to babysit. In Idaho Falls, I stayed with amazing people, family friends, who toured me through the city and took me to get bear spray. In West Yellowstone, I stayed in an atmospheric wood cabin called The Madison Hotel, where the innkeeper also obsessed over the treasure. I discussed theories with him over free hot chocolate, and he told me that if I ever found the treasure, he wanted me to do my interview in the hotel. There was so much optimism in the air.

Yellowstone is truly one of the wonders of America. Its vast, open spaces, immense forests, ample wildlife, and cheap gas prices are unparalleled. Hobbes and I waded across the Madison River, hiked through dense trees surrounding Mt. Haynes, and stumbled across fresh bear poop (which looked like blackberry pie).

I marked off areas of my map that I’d narrowed down, but the knee-high grasses and millions of trees were so much bigger in person than on the internet. After two days of searching, I drove to Gibbon Falls, and I just stood and admired the crashing water for awhile, vowing to come back again and keep looking.

Yesterday, Forest Fenn reported that someone had found it. Asked how he felt about the treasure being found, Fenn told the paper: “I don’t know, I feel halfway kind of glad, halfway kind of sad because the chase is over.” I feel the same. As life stabilized, I hadn’t found time to return to Yellowstone, but I always had the treasure in the back of my mind.

Below are my “solves” that I followed. Next time I venture east of California, I want to stop at Fenn’s art store in Santa Fe and tell him thank you for taking me on such a fun adventure. 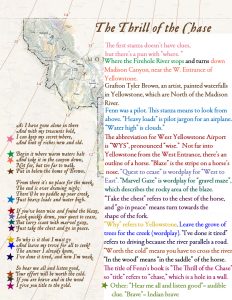 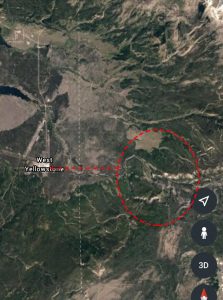 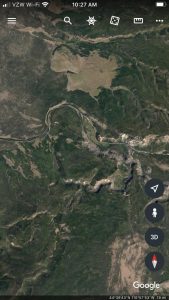 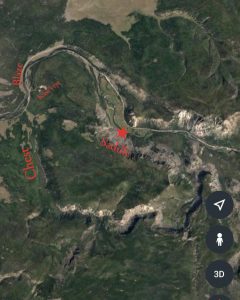 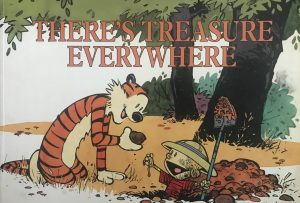 © 2023 The Vine Design by Gina. All Rights Reserved